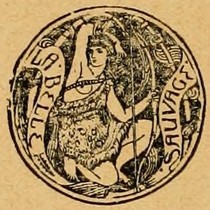 Native American daughter of an Algonquian chief; birth date approximate. According to colonist John Smith, when he was being held captive by her tribe the 11-year old Pocahontas saved his life by befriending him.

Aged 17 she was captured by the colonists and, the story goes, chose to stay with them. Tobacco planter John Rolfe took her for his wife and she bore a son in January 1615. The next year, to publicise the Jamestown settlement Rolfe took her to London and showed her off as a "civilised savage" to high society including King James.

From MyLondon: "Ealing local historian Steven Richards ... says ... “She lived for a short time in Brentford, near to Syon House, and it was here that her boat set off down the Thames. ... the actual place that they lived in... is now a Royal Mail sorting office...".

In 1617 they began the journey back to Jamestown but Pocahontas died at Gravesend, where she was buried. Her grave is lost but there is a statue.

Now here's an odd coincidence... our image, showing a young attractive female native American, was the emblem of the Cassell Company from before 1896. 'La Belle Sauvage' (French for 'the beautiful savage') was also the name given, prior to 1914, to Cassells' building just north of Ludgate Hill. It was demolished in 1873 to make way for a railway viaduct, but before 1852 when Cassells moved in it had been an inn, the inn where Pocahontas had stayed during her time in London. This perfectly explains Cassells' use of the image and their use of the name 'La Belle Sauvage' and we would stop there, perfectly satisfied, were it not for one additional fact.

The inn where Pocahontas stayed was called the Bell Savage Inn and had had this name, and variants of it, since at least 1420. Wikipedia and the document it reference) explains that the name probably came from a proprietor named Savage and a bell being a symbol for an inn. Was it just chance that Pocahontas, 'la belle sauvage' was boarded in a pub called the Bell Savage?

That is a big coincidence so we suggest some alternatives. Did Rolfe, knowing of the inn, deliberately chose it, possibly hoping to gain extra publicity from the 'coincidence'? Or perhaps Pocahontas did not stay there at all. We cannot find the text of the Wikipedia source on-line but the National Archive says "We have surprisingly few references to her visit in the public records..." and goes on to quote a few, none of which refer to her accommodation. Perhaps Wikipedia's source is rock solid but if not we think the most likely solution to the puzzle is that the story that she stayed at this inn grew out of the inn's name, probably after she had left London, as a type of urban legend, and Cassells' adoption of the story only strengthened it.

This section lists the memorials where the subject on this page is commemorated:
Pocahontas