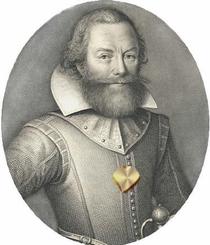 Citizen and cordwainer (cobbler), first among the leaders of the settlement at Jamestown, Virginia from which began the overseas expansion of the English speaking peoples. Born Lancashire.

16 years before the Mayflower, Smith set sail from Blackwall to found the colony of Virginia in 1606. Following a period as the prisoner of the native Americans (famously "saved" from death by native American princess, Pocahontas) he became head of the settler's colony before returning to London in 1609-1. He was buried in St. Sepulchure's Holborn in 1631 where his gravestone can still be found.

Smith recognised that he needed to maintain peace with the Native Americans for his colony to survive.

This section lists the memorials where the subject on this page is commemorated:
Captain John Smith

Vicar. Born circa 1568. He was chaplain to the Jamestown Settlement.