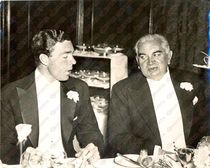 Investment banker. Chairman of Beechams Pills Ltd in 1936. Chairman of Covent Garden Properties Company Limited, in 1933. The most interesting fact we can discover is that he moved into 68 Brook Street in 1933 (From British History on-line).

Our colleague Andrew Behan has researched this man and provides his dates and full name, Philip Ernest Hill, and the following: Hill was born at 8 Scarborough Terrace, Torquay, Devon, the younger son and youngest of three children of Philip and Mary Hill. His father was a cab proprietor. The 1939 register that was taken on the outbreak of WW2 showed that he was living at Sunninghill Park, Windsor, Berkshire, with his wife, and several servants including a Private Secretary, a Valet, a personal Maid, a Cook, 2 Chauffeurs and a footman.

When he died on 15 August 1944 he had been living at Windlesham Manor, Windlesham, Surrey and probate was granted to his widow, Phyllis Lytton Hill, whom he had married in 1934, and his estate totalled £3,008,327-10s-1d. Andrew adds "Isn't it wonderful that your worth over £3M, but they work out you estate to the last penny!"

Heraldry Online has details of has "details from Thomson Roddick Scottish Auctions May 2015 catalogue of the 1935 Grant of Arms to Philip Ernest Hill (b.1873 d.1944) of Brook Street in the City of Westminster." and "Philip Hill bought Sunninghill Park in 1936. The property was purchased by the Crown Estate in 1945 from his estate as a possible home for the Princess Elizabeth. When he died in 1944 he left a gross estate of £3,008,327. However, there were some complications with the estate because the London Gazette published a notice in 1956 seeking those who had a claim on part of his estate."

This section lists the memorials created by the subject on this page:
Philip E. Hill

Anarchist publishing house in Whitechapel. Co-founded by Peter Kropotkin as a...

President of the Chelsea Temperance Society in 1908.

Liberal councillor. Vice Chair of the Bow Parks Board in 1990.