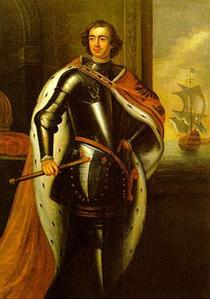 Born in Moscow as Pyotr Alexeyevich Romanov. He was created joint czar with his mentally disabled half-brother Ivan V, in 1682. In 1697 he set off for a tour of Europe, in which he amassed knowledge of western technology. When he arrived in London in January 1698 to study shipbuilding, John Evelyn rented a Deptford house, Sayes Court, to him for four months - a decision he came to regret, as the czar and his associates trashed the place. On his return to Russia, he implemented many reforms which turned the country into a major world power.

This section lists the memorials where the subject on this page is commemorated:
Peter the Great