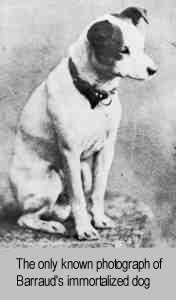 Born Bristol (or found as a stray, sources differ). Mixed breed with a reputation for nipping visitor's legs, hence the name. His owner, Mark Barraud (1848-1887) worked as a scenery designer in the Bristol Prince's Theatre in Park Row and would often have his dog with him. No longer a theatre, the building boasts a plaque and a statue of Nipper.

On Mark's death his brother Francis took care of the dog and when he died he was buried in a park in Kingston upon Thames. This was built over but one of the buildings, the Lloyds Bank in Clarence Street, has a brass plaque to Nipper just inside the entrance (awaiting a visit from London Remembers). See Francis Barraud for Nipper's afterlife.

Seven horses were killed by the bomb or as an act of mercy shortly after.  On...