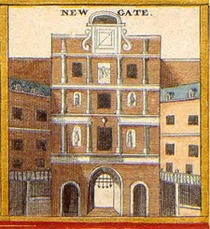 Newgate was the western exit through the Roman London Wall. In later years the gate house was about 100 feet wide. Part of this building was used, from at least the 12th century, as a prison and thus began the use of the site, and extensions to the south, that continued through until the last prison was closed in 1902, demolished in 1904 and replaced with the Old Bailey.

2018: From Ian Visits: Warwick Passage runs under the Old Bailey and at the far end in a small garden are four columns reclaimed from the 1907 Central Criminal Court building when it was expanded in 1972.

2019: Thackeray's title character Henry Esmond, having been imprisoned with some friends relates (p168): "Our rooms were the three in the gate {sic} over Newgate - on the second storey, looking up Newgate Street towards Cheapside and Paul's Church. And we had leave to walk on the roof and could see thence Smithfield and the Bluecoat Boys' School, Gardens and the Chartreux, where as {I} remembered {two friends} had had their schooling."

This section lists the memorials where the subject on this page is commemorated:
Newgate

This Alan Eisen flickr page will take you on a walk of the Wall, showing many...

First conserved in 1959 by the Ministry of Works when it was in the basement ...