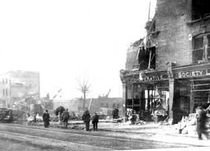 The rocket landed on the Woolworth's building at 12.44pm It was a sunny Saturday and many people were out shopping. There were rumours that Woolworth's were selling saucepans (which were in short supply) and a long queue had developed. Neighbouring grocers and butchers stores were also destroyed, and Deptford Town Hall across the road was damaged. Apart from shoppers, casualties included passengers on a passing bus and troops in an army truck. 168 people died. It took three days to clear the debris and 24 bodies were never identified.

This section lists the memorials where the subject on this page is commemorated:
New Cross V2 attack

Patricia Mabel Townsend was born on 7 June 1919, a daughter of Walter James T...