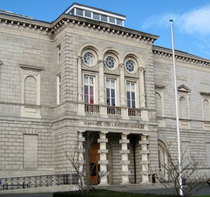 Located in Merrion Square West, Dublin. The engineer William Dargan, wanting to emulate the Crystal Palace Exhibition of 1851, set up an art exhibition in a series of pavilions. Such was its success, that a committee was formed to consider the establishment of a permanent national gallery. After ten years, campaigns for its funding resulted in the building, designed by Francis Fowke, being opened by the Earl of Carlisle. Initially it contained one hundred and twelve pictures, thirty of which were on loan from other galleries.

This section lists the memorials where the subject on this page is commemorated:
National Gallery of Ireland