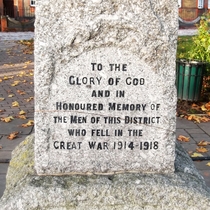 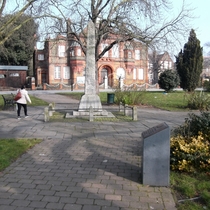 {On the top of the front of the plinth}
The cause called them, they went and won - for you.

{On the rear of the obelisk:}
Deo Pro.

{On the four faces of the plinth and the base of the memorial:}
442 names (See commemorated subjects).

We first photographed this memorial some time ago when it was in a very bad condition. It has since been completely renovated, but there are still four names which are only partially legible, bringing the total of men remembered to 442.

The Windrush memorial is on the plinth at the lower right of the photograph.

This section lists the subjects commemorated on the memorial on this page:
Tottenham and West Green - WW1 memorial

This section lists the other memorials at the same location as the memorial on this page:
Tottenham and West Green - WW1 memorial

Transcribing the names was very difficult and there are probably errors, part...