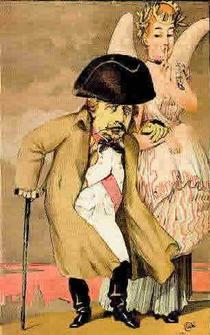 Last monarch of France. Son of Louis Bonaparte (Napoleon I's brother) and Hortense de Beauharnais, he was known as Louis Napoleon. He grew up in Switzerland and Germany, but due to involvement in revolutionary activities spent time in exile in the US, Switzerland and London. He was here in 1836, 1838-40 and 1848. The Second Empire was established in November 1852 and Louis Napoleon became Emperor Napoleon III. His reign was ended in 1870 by disaster in the Franco-Prussian War. So what did he do? Off to exile in England, where he eventually died, in Chislehurst. He died at his home at Camden Place, an 18th century mansion which would in 1894 become Chislehurst Golf Club.

In Manet's painting "The execution of Maximilian" the soldier at the back preparing to deliver the coup de grace is supposedly a portrait of this Napoleon, thus pointedly blaming the Emperor for the death.

The death of Napoleon III's son, also Louis-Napoleon, in 1879 ended the Napoleonic dynasty.