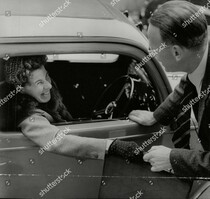 She was born as Iris Mary Caroline Dean on 10 August 1906 in Birmingham, Warwickshire, the daughter of Herbert Stanley Dean (b.1873) and Ethel Mary Dean née Lovegrove (b.1878). She was baptised on 13 October 1906 in St Thomas's Church, Godolphin Road, Hammersmith, where in the baptismal register the family is shown as residing at The Lodge, Suffolk Street, Birmingham and her father was described as a manager.

The 1911 census shows her living in a five roomed house called The Lodge, 131 Suffolk Street, Birmingham, with her parents and a female domestic servant. Her father described his occupation as a manager of a furniture depository.

In The London Gazette dated 7 October 1930 she is shown as having been appointed as a Post Office telephonist on 17 September 1930 in London. Postal Service Appointment Books confirm that she was a telephonist at the London Trunk Exchange. Electoral registers in 1931 show her listed at 2 Mecklenburgh Street, St Pancras.

On 29 September 1934 she married John Bonham Pigg (1907-1978) at St Peter's Church, Regent Square, Camden where the marriage register shows her as a spinster of 44 Gordon Square, Camden. Her husband was described as a journalist of 11 Mecklenburgh Street, Camden. Electoral registers in 1935 and 1936 show her and her husband listed at 41 Mecklenburgh Square, St Pancras and they were still listed there on the 1939 England and Wales Register in which her occupation was recorded as a teacher of languages.

Electoral Registers from 1945 to 1959 show her both a Business Premises Voter for a property at 23 Oakley Square, London, NW1 and also as Residential Voter, together with her husband, at 30 Torrington Square, London, WC1. From 1960 onwards she is only recorded at 30 Torrington Square with her husband. In March 1946 she made her first attempt to enter local politics as a Labour Party candidate for Holborn at the London County Council elections, but was not elected. The London Gazette dated 7 January 1947 shows that by deed poll dated 18 December 1946 her husband renounced and abandoned the surname Pigg and in lieu therefore assumed the surname of Bonham and so she became Mrs Iris Mary Caroline Bonham. His home address was recorded as 30 Torrington Square, London, WC1.

She was successfully elected as a Labour party member of the London County Council for St Pancras South East for 1948-1949 and for St Pancras North from 1949 to 1959. She was also a member of St Pancras Borough Council where she served as Mayoress for the mayoral year 1955-1956. She was also a Labour Party member of the Greater London Council for Hammersmith and Fulham from 18 June 1964-1967 and 1970-1973. She also served as the Hammersmith North representative from 1973 to 1977.

She died, aged 80 years, on 26 March 1987 and her body was cremated on 9 April 1987 in the West London Crematorium, Harrow Road, London, NW10 5JS. Probate records confirm her date of death and that her address had been 30 Torrington Square, WC1. Probate was granted on 4 September 1987 and her effects totalled £134,984. Her death was not registered until the 4th quarter of 1987 in the Hackney registration district.

This section lists the memorials created by the subject on this page:
Mrs Iris Mary Caroline Bonham

Alfred Cotgreave was born on 7 June 1846 in Eccleston, Cheshire, the son of R...

Catalan free-thinker and anarchist.  Born near Barcelona.  Executed for armed...