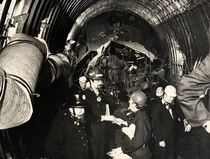 At Moorgate station a southbound tube train from Drayton Park failed to stop on a terminus platform, ran into the tunnel, through the buffers and smashed into the wall at the end. Because it was built for mainline trains the tunnel was large enough to allow the carriages to ride up over each other. This was on a Friday at 08.46 so the train was packed with commuters. 43 died and about 80 were injured.

This section lists the memorials where the subject on this page is commemorated:
Moorgate tube disaster

Our page for the monument in nearby Finsbury Square lists the 43 people.

Politician. Born in Borowica, Poland. He became involved in the Jewish labour...