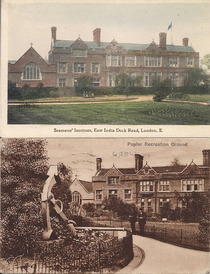 From Port Cities: " ... the Missions to Seamen organization {was} founded in 1856. Its task was to coordinate the work of various Anglican ministries on behalf of seamen.  The organization's most obvious presence in London was its Institute on the East India Dock Road, opened in 1893. It contained a church,  gymnasium, coffee bar and classrooms. Although the Institute was closed in 1932, when Missions to Seamen moved to new headquarters in the Royal Docks, the building has survived.   The organization was renamed the Mission to Seafarers and remains active in 100 ports worldwide, including Tilbury. To find out more, go to the Mission's website."

The postcards show the east face of the building from across the Poplar Recreation Ground.

This section lists the memorials where the subject on this page is commemorated:
Missions to Seamen Institute

Philanthropist and shipowner. Born 27 Bedford North Street, Liverpool. On his...