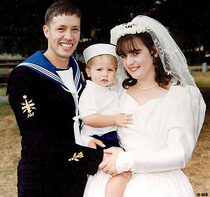 Andrew Behan has kindly carried out further research: Michael John Hodder was born on 9 September 1968 in Reading, Berkshire. He served in the Royal Navy as a gunner during the First Gulf War and in August 1994 he married Kerry A. Page-Smith, a dental worker, and they had three children, Ben Michael Hodder, born 1992; Callum James Hodder, born 1995 and Megan Rhiann Hodder, born 2000. The family lived at 21 Poole Close, Tilehurst, Berkshire. He left the Royal Navy in 1996 on health grounds after dislocating his shoulder. His father had been a conductor on the railway and, following in his footsteps, he qualified as a driver for Thames Trains in August 1999. He died, aged 31 years, on 5 October 1999 when, as the driver of the 8.06am Thames Trains Turbo train from Paddington to Bedwyn, Wiltshire, it collided with the 6.03am First Great Western High Speed Train from Cheltenham Spa, Gloucestershire to Paddington at Ladbroke Grove. He was identified by his dental records and never saw his daughter who was born after his death.

This section lists the memorials where the subject on this page is commemorated:
Michael Hodder