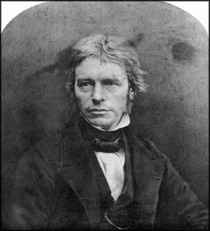 Experimental physicist, especially electro-magnetics (remember Faraday's Law?). Born in Newington Butts but brought up near Oxford Street. Trained as a bookbinder and here he was given tickets to some Davy lectures at the Royal Institution. This experience caused him to take up a scientific career, a novel idea in those days. Davy gave him a job as a laboratory assistant with accommodation at the RI, where he lived and worked, 1813 – 1858. The British Society for the History of Mathematics lists his achievements there. Invented the electric motor dynamo, designed the Bunsen burner, discovered electro-magnetic induction. Throughout his life he was an active member of a small Christian sect, the Sandemanian church, in which his parents had raised him. Died at home at The Green, Hampton Court, the grace and favour house to which he had moved in 1858, provided for him by Queen Victoria. Buried in Highgate cemetery.

A 2007 publication 'Maths Trails' states "There is a Southwark plaque on the south side of the Elephant and Castle Shopping Centre, near the Butts pub, but almost concealed by a large billboard just above it." We've repeatedly looked for this and cannot find one that meets the description but we think it might be this plaque, moved into a better position.

This section lists the memorials where the subject on this page is commemorated:
Michael Faraday