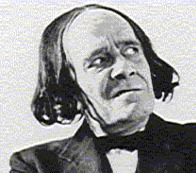 Comedian and actor. Born Maxwell George Lorimer at 37 Glenshaw Mansions, Brixton. His parents were both music-hall entertainers. After his father's death, his mother married Harry Wallace, from whom he adapted his stage surname. His career started in the theatre and progressed to radio and television. He developed the loose-limbed character, Professor Wallofski, for which he is probably best remembered. When the appeal of variety began to pall, he took to acting, appearing in John Osborne's 'The Entertainer' and several of Samuel Beckett's plays. He fell and struck his head as he was leaving Simpson's restaurant in the Strand, and was pronounced dead on arrival at the Westminster Hospital.

This section lists the memorials where the subject on this page is commemorated:
Max Wall

In 1705 Vanbrugh completed the Queen's Theatre, named in honour of Queen Anne...