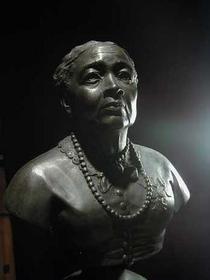 Jamaican nurse, heroine of the Crimean War. That's the standard depiction of her but some people, as reported in a Guardian article, feel that Seacole has been promoted to the detriment of Florence Nightingale's reputation.

Born as Mary Jane Grant in Jamaica, to a Scots lieutenant and a free Jamaican woman, who ran a hotel in Kingston and was a healer, using traditional remedies. Mary learnt good hygiene and the use of herbal remedies from her mother and through her father’s connections also learnt the methods used by military doctors.

Visited London twice in about 1821 seeing family and selling West Indian produce. 1836 married Seacole but he died in 1844. She travelled to Central America visiting family, treating cholera patients and running a hotel/restaurant. 1854 she came to London and volunteered as a nurse for the Crimean War but was rejected, the reason not being clear but racism is likely.

So she travelled there in partnership with Thomas Day and set up a hotel, built from scrap materials, which opened in March 1855, though it was more a restaurant and provisions store servicing officers and sightseers. She went to the British camp, sold provisions to the soldiers themselves and attended the casualties. She provided catering for the spectators at the battles and also brought medical provisions and attended the wounded there. The end of the war meant her business finished abruptly and Seacole returned to London arriving in August 1856 with poor health and poor finances. She and Thomas Day were bankrupt by November and the partnership broke up. It is possible that theirs had been a personal as well as business relationship.

She was supported in London through charitable donations. Her autobiography, ‘Wonderful Adventures of Mrs Seacole in Many Lands’, was published in 1857. Her fame meant the charitable fund attracted donations from wealthy, society people. She spent the next 10 years in Jamaica, returning to London in 1870 where she mixed with some of her patrons, becoming a masseuse to Princess Alexandra. Died at home, 2 Cambridge Gardens, Paddington.

In Britain she was then largely forgotten but, increasingly, since the 1970s her achievements have been promoted, and her lack of recognition explained by racial bias. The media like to present this as a Nightingale versus Seacole competition. The Nightingale supporters were particularly aggrieved that the Seacole statue was erected at the hospital that is so associated with Nightingale.

This section lists the memorials where the subject on this page is commemorated:
Mary Seacole

Oculist to the court of Hungary.