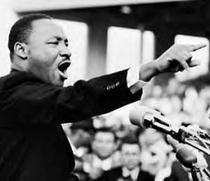 One of the world's most famous civil rights activists, A Baptist minister, he visited London in December 1964 on his way to Oslo to collect his Nobel Peace Prize. He stayed at the Hilton, spoke at St Pauls Cathedral and visited Parliament. He was assassinated in 1969. His assassin, James Earl Ray, was arrested at Heathrow Airport.

This section lists the memorials where the subject on this page is commemorated:
Martin Luther King

The chapel was demolished to provide the adjacent Nautical School with a play...

This National Library of Scotland 1914 map shows the "Missn Ch" between Eastw...