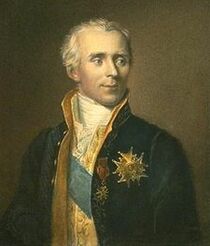 Pierre-Simon, Marquis de Laplace, was born on 23 March 1749 in Beaumont-en-Auge, Normandy, France, the fourth of the five children of Pierre Laplace and Marie-Anne Laplace née Sochon. His father was a farmer.

He was a French astronomer and mathematician who at the age of 39, married 18-years-old Marie-Charlotte de Courty de Romanges and they had a son and a daughter. Our picture source gives details of his life and achievements.

He died, aged 77 years on 5 March 1827 in Paris, France and was initially buried in the Pére Lachaise Cemetery, 6 Rue du Repos, Paris, France, but in 1888, at the request of his son, his remains were exhumed and re-interred along side his wife and daughter's remains on on the family's estate at St Julien de Mailloc, Calvados, Normandy, France.

This section lists the memorials where the subject on this page is commemorated:
Marquis Pierre Simon de La Place

Less than a month after the lights were installed the lamp blew up, seriously...

Industrialist and inventor. From Preston. Set up a factory with a newly desi...

Astronomer and journal editor, born at Rugby. Discovered and named the elemen...