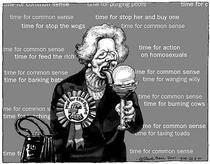 Prime Minister: 1979 - 1990. Born Grantham. MP for Finchley: 1959 - 1992. A Marmite politician of the highest order - her death was greeted with a rare mix of immoderate panegyrics and gleeful celebrations.

2017: The proposal for a 10-foot statue in Parliament Square was cancelled due to the likelihood (near certainty) of vandalism.

2021: In the midst of a scandal about the costs of erecting the statue in Grantham, sculptor Mark Robla placed on the waiting plinth a sculptured severed head (Thatcher's) on a spike, saying that it saved the Council a fortune.

2022, 16 May: The Sydney Morning Herald reported: "A statue of Margaret Thatcher was egged within two hours of being placed in her home town". And by the next day someone had set up a stall next to the statue selling eggs, at £10 each. Private enterprise at its finest - Thatcher would have approved.

This section lists the memorials where the subject on this page is commemorated:
Margaret Thatcher

This section lists the memorials created by the subject on this page:
Margaret Thatcher

This is the millionth tree of the Countryside Commission's Task Force Tree Pr...

Clerk in 1952 of the rebuilding of Haberdasher Place.

Deputy of the ward of the parish of St Mary the Virgin Aldermanbury. The Stor...