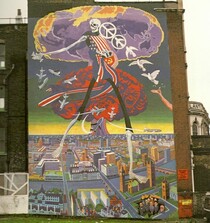 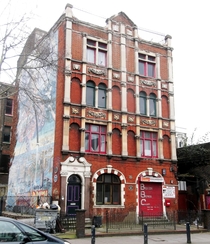 Created as a protest against cruise missiles. The bottom right hand corner shows prominent people of the time, including Thatcher, Reagan and Prince Charles, sheltering in a bunker during a nuclear attack on London. Over the years the mural has deteriorated and other 'artists' have added graffiti to it.

Our image of the mural, before the weather, vandals and graffitists got to it, comes from the London Mural Preservation Society.

The Nuclear Dawn Mural plaques are on the left side of the building, the muraled side. The other two are on the front. The mural is not a memorial (for which we are thankful - we don't want to live in a post-nuclear world) but, when new, was rather good.

This detached Victorian block, constructed in 1891, stands in the middle of major redevelopment plans, and its residents were evicted in 2014. Brixton Buzz shows the plans for this building - to be a workplace for the new adjacent Ovalhouse Theatre. In the comment section a councillor is reported as giving assurance that the mural will survive.

This section lists the subjects commemorated on the memorial on this page:
Nuclear Dawn mural

This section lists the subjects who helped to create/erect the memorial on this page:
Nuclear Dawn mural

A long-running squat. News of evictions prompted some interviews with residen...

This section lists the other memorials at the same location as the memorial on this page:
Nuclear Dawn mural

Urban75 has photos of the 2011 unveiling of this plaque and the subsequent pa...

Afropunk and other sites have the quotation as “You can kill the revolutionar...