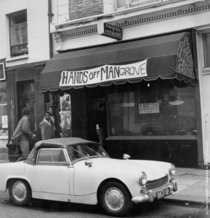 At 8 All Saints Road, Notting Hill.  Created and owned for 24 years by Crichlow.  It was a centre for political and social activism within the African and Caribbean culture.  Visitors included: Jimi Hendrix, Vanessa Redgrave, Sammy Davies Jnr, Diana Ross and Marvin Gaye.  A heavy-handed police raid in 1988 led to Crichlow being charged with supplying heroin and cannabis.  At his trial the following year all charges were dropped and he won his £50,000 claim for false imprisonment, battery and malicious prosecution.  However one of the effects of the raid, imprisonment and trial was that the restaurant failed.

Initially we thought that the building in this photo was not 8 All Saints Road but Jamie Davis has convinced us that it is.  Both number 8 and the building on the left have been subjected to some rather extensive renovations which makes them difficult to recognise.  But the kink in the down-pipe is the giveaway.

This section lists the memorials where the subject on this page is commemorated:
Mangrove Restaurant