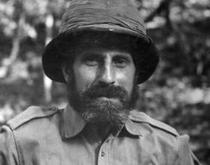 British army officer. Born in India to a military family. One of the founders of modern guerrilla warfare, he specialised in creating military units which used these tactics, the best known such unit being the Chindits.

Killed in an air crash in India along with 9 others, mainly Americans. Individual identification was not possible and initially all the bodies were buried in India but in 1950 they were exhumed and reburied in Arlington Cemetery, USA.

This section lists the memorials where the subject on this page is commemorated:
Major General Orde Wingate