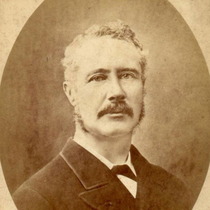 Army officer. Made his military reputation in China. Achieved lasting fame through his death at the siege of Khartoum.

Gordon's School near Woking was founded by public subscription, at the express wish of Queen Victoria, as the National Memorial to General Gordon. At the school is another statue, showing Gordon atop a camel - quite something, and much travelled. George Pollen has posted a Youtube video (2019 not available} which shows the plaque and the camel statue. Wikipedia sets the record straight regarding the movement of statues: “The Corps of Royal Engineers, Gordon's own Corps, commissioned a statue of Gordon on a camel. It was exhibited at the Royal Academy in 1890 and then erected in Brompton Barracks, Chatham … where it still stands. Much later a second casting was made. In 1902 it was placed at the junction of St Martin's Lane and Charing Cross Road {where the Cavell statue now is}. In 1904 it was moved to Khartoum …. It was removed in 1958, shortly after the Sudan became independent. This is the figure which, since 1960, stands at the Gordon's School in Woking.”

This section lists the memorials where the subject on this page is commemorated:
Major General Charles George Gordon

Footballer and soldier. He started his football career with Sunderland Distri...

Order of St John of Jerusalem

The Priory was the English headquarters of the Order of St John of Jerusalem ...