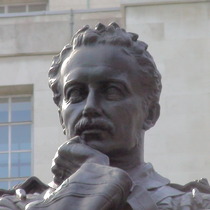 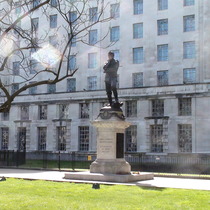 {The left and right sides of the plinth each carry a large bronze relief. The plinth frieze carries the titles, on the left:}
Fortitude, Faith
{Fortitude’s shield reads “Right fears no might”.}

{on the right:}
Charity, Justice

{Each panel is inscribed:}
Hamo Thornycroft 1888
{The attachment for the panel on the left has obliterated the last 2 digits.}

Prompted by us publishing this statue Margaret Wright sent lots of information including:

1888 this statue was originally erected in Trafalgar Square between the two fountains but was removed in 1943. 1953 it was re-erected in its current location but lacking part of its pedestal. An exact copy, with the full pedestal, was erected in Melbourne, Australia in 1889. Gordon had no particular connection with Australia.

This section lists the subjects commemorated on the memorial on this page:
General Gordon statue

This section lists the subjects who helped to create/erect the memorial on this page:
General Gordon statue