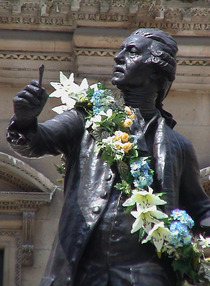 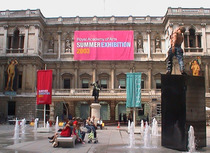 {On the pedestal, at the front:}
Sir Joshua Reynolds, 1723 - 1792
First President of the Royal Academy
Alfred Drury RA - Sculptor

{On the pedestal, at the back:}
Erected by the Royal Academy of Arts through the Leighton Fund 1931.
The inscription was recarved 2002.

This section lists the subjects commemorated on the memorial on this page:
Burlington House courtyard - Joshua Reynolds

This section lists the subjects who helped to create/erect the memorial on this page:
Burlington House courtyard - Joshua Reynolds

This section lists the other memorials at the same location as the memorial on this page:
Burlington House courtyard - Joshua Reynolds

The thinker in a cubby-hole effect is enhanced by being shrouded in netting (...

The statue was originally erected in the great hall of the old King's College...