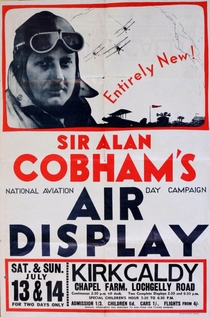 Aviator. Born Alan John Cobham in Camberwell. He joined the Royal Flying Corps in World War I, and went on to become the first test pilot for the de Havilland Aeroplane Hire Service. In 1932 he started the National Aviation Day displays, which consisted of teams of up to fourteen aircraft, performing at hundreds of sites around Britain. Later he pioneered the use of in-flight refuelling.

Wikipedia has him dying in Bournemouth. The Oxford Dictionary of National Biography has him dying at Tortola, British Virgin Islands where he had retired. Take your pick.

This section lists the memorials where the subject on this page is commemorated:
Sir Alan Cobham

DHC stands for De Havilland Canada. It was a turboprop-powered airliner with ...