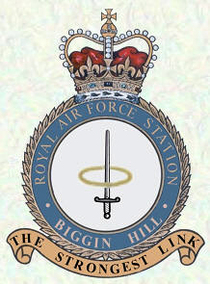 The airfield was originally opened by the Royal Flying Corps during World War I. At first it was used for wireless experiments, but was then established as part of the London Air Defence Area, responsible for defending the capital against air attacks. During the Second World War the airfield was a controlling station in No 11 Group, Fighter Command during the Battle of Britain. The squadrons based here claimed to have destroyed 1,400 enemy aircraft, at the cost of the lives of 453 Biggin Hill based aircrew. Nowadays, as Biggin Hill Airport, it is used mainly for business jet flights.

This section lists the memorials where the subject on this page is commemorated:
Biggin Hill Royal Air Force Station

War Reserve Constable who joined the Met Police on 3 September 1939.  He was ...