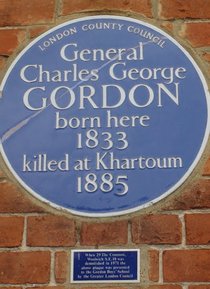 {On the small blue rectangular plaque below:}
When 29 The Common, Woolwich SE18 was demolished in 1971 the above plaque was presented to the Gordon Boys’ School by the Greater London Council.

Our photo comes from Mapio. These two plaques are on display at Gordon's School, near Woking, on the external wall of one of the buildings there. OK, not really 'lost', but certainly lost to London.

Gordon's School was founded by public subscription, at the express wish of Queen Victoria, as the National Memorial to General Gordon.

This section lists the subjects commemorated on the memorial on this page:
General Gordon's birth place - lost plaque, blue

This section lists the subjects who helped to create/erect the memorial on this page:
General Gordon's birth place - lost plaque, blue

This section lists the other memorials at the same location as the memorial on this page:
General Gordon's birth place - lost plaque, blue

To the glory of God and in memory of our fallen comrades this stone was laid ...

Given the state of the inscription we hope you are impressed with our ability...