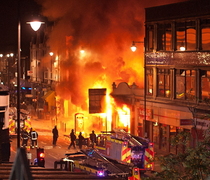 On the 4th August 2011, Mark Duggan, a 29-year-old black resident of Tottenham, North London, was shot and killed by the police. They stated that officers were attempting to arrest him on suspicion of planning an attack, and that he was in possession of a handgun. Duggan's death provoked public protests and eventually riots in Tottenham, fuelled in part by poverty and racial tension. The following days saw similar scenes in other parts of London, and other cities in England. Parliament was recalled on 11th August to debate the situation. Several thousand people were arrested, many of them being charged with criminal offences. There were five deaths as a direct result of the disturbances and an estimated £200 million worth of property damage was incurred.

This section lists the memorials where the subject on this page is commemorated:
London Riots - 2011

Explorer. Born in the Republic of Genoa (his birth date is approximate). From...