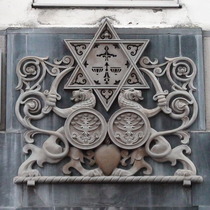 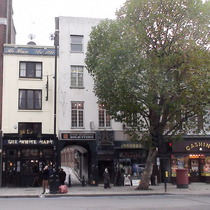 The building's listing entry describes this sign, 1934-5 designed by Arthur Szyk: “a metal relief, painted gold and fixed to the wall. The design is a Magen David, or Star of David, supported by two lions of Judah rampant and wielding sabres. Beneath is a pair of medallions, decorated with Menorot or seven-branched candelabra. The clawed feet of the lions rest on a thin turned base which is fixed to the wall.”

Note: the Jewish East End Celebration Society use this symbol as a sort of logo.

This building is listed, primarily due to this sign and another similar one inside on the first floor.  (Originally, there were signs on each floor, and all but these were destroyed in a fire in the second half of the C20). Note also the 1950s shop front, the symmetry of which is rather obscured by the tree.  We have quoted generously from the listing but the full entry is well worth a read.

The building was refurbished “by H P Sanders in 1934-5 for the Jewish Daily Post ….. This involved the refurbishment of the upper storey offices and the erection of several signs, depicting Jewish emblems, two of which survive ….  The second reconfiguration dates from the 1950s when the ground floor shop was refurbished for Alberts Menswear who moved there in 1942, after their premises nearby was damaged in an air raid. In recognition of the building's continuing Jewish connections (Alberts were part of the Jewish rag trade), this refurbishment incorporated the older sign into the design of the shop front. The shop front design is in the fashion of the 1930s, as seen in the Egyptian-inspired Art Deco lights and the use of red neon, which continued in many commercial premises after the war.”

This section lists the subjects commemorated on the memorial on this page:
Jewish newspaper