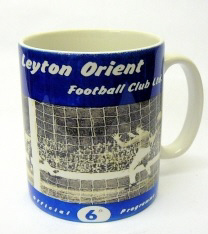 Originally formed by members of the Glyn Cricket Club. Playing under various names, including Clapton Orient, the team adopted its present name at the end of WW2. Its crest features two wyverns (bipedal winged dragons) facing each other over a football.

26 October 2020: East London and West Essex Guardian published an article about a war memorial raised in France "10 years ago this week". "A momentous chapter in Leyton Orient FC's history has been immortalised with the unveiling of a memorial to footballers who fought and died in the First World War. The 1.75-metre high stone plaque has been erected by the Football League near the Somme in France to commemorate the men who fought in the conflict's 'Football Battalions', which were comprised entirely of players, staff and fans from clubs up and down the country. Clapton Orient – as the O's were known until the 1940s – played a key part in these unique fighting forces, as it was the first team to sign up its entire squad."

This section lists the memorials where the subject on this page is commemorated:
Leyton Orient Football Club

It was the 11th Women's Cricket World Cup, held four-yearly, (the third to be...

This was the 12th Men's Cricket World Cup, held four-yearly, and was contende...