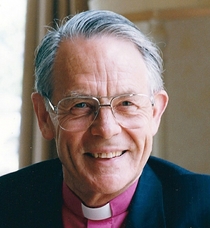 Cricketer and bishop. Born David Stuart Sheppard in Reigate, As a cricketer he played for Cambridge University, Sussex and England. He converted to Evangelical Christianity while at Cambridge, and was ordained in 1955. He became Bishop of Woolwich in 1969 and Bishop of Liverpool in 1975.

An active broadcaster and campaigner, especially on the subjects of poverty and social reform in the inner cities, he opposed apartheid and the tour to England by the South African cricket team in 1970. Created Baron Sheppard of Liverpool in 1998.

This section lists the memorials where the subject on this page is commemorated:
David Sheppard

From Wesley's Chapel and from Kay: The Leys School was opened in Cambridge i...