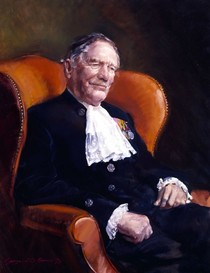 Major Leslie Sydney Marler, O.B.E., T.D. was born on 7 July 1900 in Northwood, Middlesex, the son on Leslie Thorburn Marler and Edith Marie Marler née Chapman. His father was a surveyor, estate agent and auctioneer. The 1901 census shows him living with his parents at 18 Castelnau Mansions, Castelnau, Barnes, Surrey. By the time of the 1911 census the family had moved to 93 Comeragh Road, West Kensington. During World War One he enlisted as a driver in the Royal Field Artillery with the rank of Signaller. His service number was 290895 and he was subsequently awarded the British War Medal 1914-1918 and the Victory Medal. The London Gazette reports that as a cadet he would become a temporary 2nd Lieutenant in the Royal Regiment of Artillery with effect from 4 April 1919. On 24 October 1924 he was appointed as a Second Lieutenant in the Territorial Army's Honourable Artillery Company.

He married Doris Marguerite Swaffer on 1 September 1926 at St Mark's Church, Hamilton Terrace, St John's Wood and the marriage registration records show that at the time he was living at 109 Castelnau, Barnes, S.W.13 and his occupation was a Surveyor. They had three children, June E. Marler born 1928, Leslie R. S. Marler born 1930 and Christopher J. S. Marler born 1932. Electoral registers show that in 1927 they were living at 'Timewells', Oatlands Close, Weybridge, Surrey, but by 1932 they were living at 'Heatherley', St George's Road, Weybridge.

They stayed there until 1937 when they moved to Wavendon Tower, Walton Road, Wavendon, Bletchley, Buckinghamshire. During the Second World War these premises were used by the British Special Intelligence Service (MI6) to record black (clandestine) propaganda programmes for transmission to German occupied countries in Europe. In the 1957 New Years Honours List he was awarded an O.B.E. for political and public services in Buckinghamshire.

By 1961 they had moved to 'Bolebec House, Oving Road, Whitchuch, Buckinghamshire. He was appointed the High Sheriff for Buckinghamshire in the Queen's Bench Division of the High Court of Justice for 1971-1972. He died, aged 80 years, on 12 April 1981 and when probate was granted his estate totalled £277,316.

The painting of Marler was painted by George J. D. Bruce in 1973.

This section lists the memorials where the subject on this page is commemorated:
Leslie Sydney Marler

Say what you like about estate agents, they are sometimes extremely helpful w...

Since 1927 Abbey head office had occupied the site where 221b Baker Street wo...

Signage company. It was named after their concept called the 'brilliant lette...