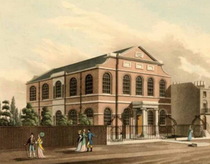 2017 the church was planning to redevelop the site and their Public Consultation document gives the history of the site with some interesting images and maps. The maps there suggest that the footprint of the new church is slightly shifted southwards compared with the old.

In 1928 J, Arthur Rank, a devout Methodist, partially funded its adaptation for use as a mission hall and cinema. It opened as the Ideal Cinema on 5 October 1928, was run by Rev. Tiplady and showed family-friendly films. Destroyed by WW2 bombs in the winter of 1941. Rebuilt in 1950, architect Alec Gavin, as the Lambeth Mission, opening 1 September 1951. Lambeth have a photo of the stone-laying ceremony.

From Lambeth Methodist Circuit: "The Lambeth Mission has a proud history; set up by the first Methodists, converted by John Wesley himself when he preached at Kennington Common. "

Note: The British Library hold the original of this painting and give: "This chapel was one of several auxiliaries to the Parish Church of St Mary in Lambeth. It was built in 1793 to serve parishioners who could not cross the Vauxhall marshes to St Mary's. A rectangular building with public galleries on three sides, it became an independent church in the 19th century, and survives as the Church of St Anne on South Lambeth Road."  We respectfully suggest that the BL is mistaken; their text refers, we think, to the site on South Lambeth Road, while the image is of the Lambeth Chapel, built in 1808. We looked at the BL website and could see no way of raising this issue with them.

This section lists the memorials where the subject on this page is commemorated:
Lambeth Chapel

A group of evangelical Baptist churches in the UK. Founded by Rev. H. A. Squi...