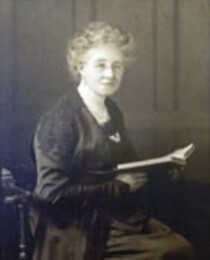 Wife of Sir Horatio Regnart. Lady Regnart was an active member of the Managing Committee of the St Pancras Almshouses 1894-1940, donating and raising funds and also providing for the residents' needs with such things as coal, blankets and hot water bottles.

On eBay we found a Middlesex Regt. shooting medal cup medal, named for her, we are guessing. "Winners of the Lady Regnant Cup".

Andrew Behan found the image and has kindly provided this research: Lady Mary Regnart was born as Mary Makepeace on 31 July 1845 in Rochester, Kent, the eldest of the ten children of William Makepeace and Charlotte Makepeace née Woodward. Her father was a lay clerk at Rochester Cathedral. She was baptised on 11 August 1845 in Rochester.

The 1891 census states that they were residing at Highgate Lodge, West Hill, Highgate, with a coachman, a groom, a gardener and three female domestic servants and the 1901 census records them at Frith Manor, Hendon, with a housekeeper, a cook and a housemaid. Telephone directories from 1904 show her husband listed at 29 Gordon Square, London, WC.

On 15 July 1907 her husband was created a Knight Bachelor by King Edward VII at Buckingham Palace and she became Lady Mary Regnart.

The 1939 England and Wales Register shows her at her country house of 'Tanleys', Tylers Green, Cuckfield, Haywards Heath, Sussex and this was where she died, aged 94 years, on 21 April 1940. She was buried with her husband at Islington and St Pancras Cemetery, 278 High Road, East Finchley, London, N2 9AG. When probate was granted on 7 June 1940 her estate totalled £41,427-12s-5d.

This section lists the memorials where the subject on this page is commemorated:
Lady Regnart

This section lists the memorials created by the subject on this page:
Lady Regnart

Gave land in commemoration of Nelson in 1905.  Great nephew of Isaac Smith th...

Trustee of The Memorial Gates Trust. Lakshmi Niwas Mittal was born on 15 Jun...