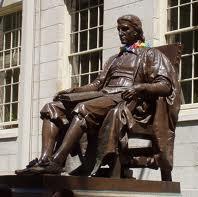 A plaque inside the library provides the following: “John Harvard was born in Southwark in 1607 and was baptized in St Saviour’s Church, the present Southwark Cathedral.  He was the son of Robert Harvard, a butcher, who became a local public figure.  His mother was Katherine Rogers from Stratford-upon-Avon, whose father’s house in that town survives and is now called Harvard House. Robert Harvard died of the plague in 1625 and his widow married twice more.  She acquired the Queen’s Head Inn in Southwark and bequeathed it to John when she died in 1636.

John was educated at St Saviour’s Grammar School in Southwark and afterwards at Emmanuel College, Cambridge.  This college was noted for its Puritan sympathies, and John eventually became a Puritan minister.  He married the daughter of a Sussex parson in 1636.  In the spring of 1637 they made the voyage to Massachusetts and arrived at Charlestown.  A year earlier the Great and General Court of Massachusetts Bay Colony had founded a college at Newtown, the first institution of higher learning in the United States.  Newtown was later renamed Cambridge.

John died {in Charlestown} of tuberculosis in 1638 and bequeathed to the new college half his fortune and the whole of his library of about 400 books.  In 1639 it was renamed Harvard College {and is where this statue sits}.  It first called itself a university in 1780.  John Harvard is commemorated in Southwark today by this library {in Borough High Street} and by a chapel in the cathedral.”

This section lists the memorials where the subject on this page is commemorated:
John Harvard

The "Queen's Head Inn", owned by the family of John Harvard, founder of Harva...

Henry Lewis Raphael had 12 children with his wife Henriette. Walter, the 6th ...