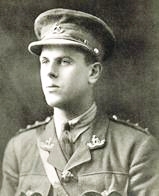 Soldier. Born Julian Royds Gribble in Chelsea. He was a temporary captain in the 10th (S) Battalion of the Royal Warwickshire Regiment. On 23rd March 1918 at Beaumetz, Hermies Ridge, France, he was in command of the right company of the battalion when the enemy attacked. Although he could have easily withdrawn, he gave orders to 'hold on to the last'. His company was eventually surrounded, and he was presumed to have been killed. He however survived, and was taken prisoner, but died of pneumonia at the Niederzwehren prisoner of war camp in Germany. His actions prevented the enemy from taking control of the ridge for several hours, and for this he was awarded the Victoria Cross.

This section lists the memorials where the subject on this page is commemorated:
Julian Gribble VC

Name on one of the corner plaques of the East Ham WW1 memorial.