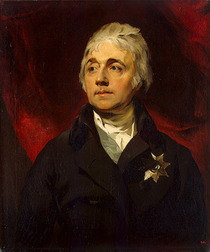 Ambassador. Born Moscow into an old aristocratic family in the Crimea. The third count Woronzow. Russian Ambassador to the UK, 1784 – 1806 (his brother Alexander, having preceded him in that role, 1762 - 4). His daughter Catherine married the 11th Earl of Pembroke and their son was Sidney Herbert. His name can also be written: Semyon Vorontsov.

While ambassador he lived at 36 Harley Street or at the ambassador's country home in Richmond, but after retirement he lived in Marylebone, with addresses in Harley Street, Welbeck Street, Berners Street. He died in Mansfield Street Marylebone, leaving a bequest for the poor of the parish which was used to build St Marylebone Almshouses. More information, and still more.

This section lists the memorials where the subject on this page is commemorated:
Count Simon Woronzow

Could this be? No, surely not. Could it be.... Charles Foster Kane?Funded the...