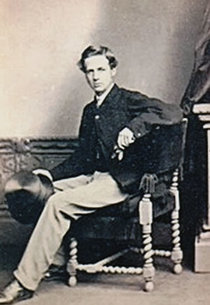 From the Bedford Park information panel: "Jonathan Carr was one of the most visionary developers of his day. Having married the daughter of a man who owned land close to Turnham Green station, in 1875 he bought 24 acres and set about creating Bedford Park. The suburb became highly fashionable with many residents living an aesthetic lifestyle in line with artistic aspirations of the day. Early residents included painters, illustrators, writers, actors and poets. Carr struggled financially with Bedford Park and sold his interests in 1886. Undaunted, he went on to develop innovative schemes in South Kensington and Whitehall."

Andrew Behan has further researched this man. Jonathan Thomas Carr was born on 3 December 1845 in Dublin, Ireland, the eldest son and the sixth of the eleven children of Jonathan Carr (1808-1881) and Catherine Grace Carr née Comyns (1817-1876). His father was a Woollen Draper and Warehouseman.

His wife was the daughter of Hamilton Henry Fulton (1813-1886), a civil engineer who lived in Bedford House and owned 24 acres of surrounding land. Seeing that the nearby Turnham Green Station offered journeys to the City in 30 minutes he saw the potential for housing and in 1875 bought the land from his father-in-law and employed several leading architects to design the first garden suburb.

The 1881 census shows him as a Woollen Salesman living at 'Tower House', Bedford Road, Acton, with his wife, their son Horace, a cook, a nurse and a housemaid. (Tower House was demolished in the 1930's and replaced with the block of flats now called St. Catherine's Court). By the time of the 1901 census he was listing himself as a Company Promoter still living at Tower House, Bedford Road, with his wife, their son Jonathan, who was shown as a Barrister, together with a cook and a housemaid.

He was a poor businessman and was subject to a record of 342 bankruptcy petitions during his lifetime. His wife died on 29 March 1902 and when probate was granted to him on 31 December 1902 her effects totalled just £3-0s-4d.

The 1911 census shows him living with his son, Jonathan, at 5 Addison Road, Bedford Park, Chiswick, and two domestic servants.

He died, aged 69 years, on 1 February 1915 and was buried in Chiswick Old Cemetery, Powell Walk,  Chiswick.

In 1917 The Church Missionary Society sold its college in Upper Street and th...