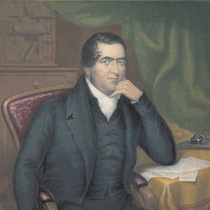 "Martyred" missionary. Born Tottenham. Trained as a foundry worker and mechanic. In 1817 the London Missionary Society sent him and his wife to the Pacific Islands where they took the good word to numerous islands. They were back in London 1834-7 during which Williams published a book about his missionary work.

On 20 November 1839 Williams and another missionary, James Harris, visited Erromango, an island in the Vanuatu archipelago, then known as the New Hebrides. There the men were attacked, killed and eaten by cannibals.

That's the story as told by Wikipedia who, on their cannibalism page, report that tales of cannibalism are thought by some to be exaggerated and racist. We would like to know how the story of the missionaries' fate reached their colleagues. Was there a witness who escaped?

The posthumous portrait is by George Baxter, who himself met a sad, but not so primitive, end.

This section lists the memorials where the subject on this page is commemorated:
John Williams

Near this site was born on June 29th 1796 John Williams, missionary and shipb...