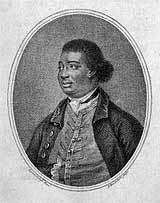 Former slave and businessman. Born in Senegal, (his birth year is approximate). At the age of about six, he was bought and taken to England, where he was presented as a servant to Sir John Phillipps of Norbiton though it seems they treated him more as a member of the family. He took his surname from Picton Castle, Phillips' country estate.

When Lady Philipps died, Picton received a legacy of £100 and set up business as a coal merchant in nearby Kingston. As Surrey Council report "In 1816 he bought a large cottage in Thames Ditton for the astonishing sum of £400, far above his inheritance, showing he had become a wealthy businessman." He was probably the richest of the thousands of black people in Britain at the time. Surrey also report "Cesar was never active in the abolitionist movement".

This section lists the memorials where the subject on this page is commemorated:
Cesar Picton

The (lack of) punctuation on this plaque makes it easy to misread.

From British History: "Burnt in the {1666 Great} Fire and rebuilt. Rebuilt ab...

Retailer. Founder of the former Bearman's department store in Leytonstone.

This seems to be a commercial organisation making and selling coins to collec...