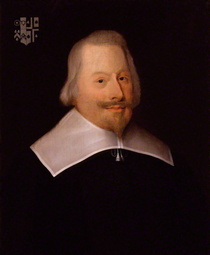 Born Somerset Supporter of the Parliamentary cause and MP. Died Derby House (was in Cannon Row, Westminster) and was buried in Westminster Abbey with a state funeral.

When Charles II was restored to the throne he ordered the disinterment of the bodies of Oliver Cromwell and his supporters, including Pym, and their reburial in an unmarked pit in St Margaret's churchyard, Westminster.

This section lists the memorials where the subject on this page is commemorated:
John Pym

A Commissioner for the 1892 Westminster Public Library. The plaque gives him...