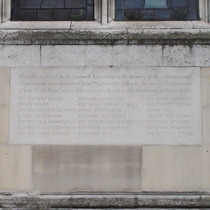 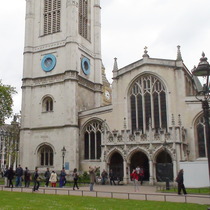 This tablet is erected by the Cromwell Association to the memory of the undermentioned whose remains were disinterred from Westminster Abbey at the time of the restoration of King Charles II and were in September 1661 buried in this churchyard of St Margaret’s.
{See Subjects commemorated for the list of 21 names, presented in three columns in alphabetical sequence.}

When Charles II was restored to the throne he issued Royal Warrant, dated 9 September 1661 which brought about the disinterment of the bodies of regicides {those who had beheaded his father King Charles I} who had been interred in Westminster Abbey since 1641 and the reburial of (most of) their bodies in an unmarked pit in the neighbouring St Margaret's churchyard.

Those on this list include: 6 politicians, 7 senior members of the armed forces, and 3 of the church, one poet/historian and 4 female family members.

Cobbett's Complete Collection of State Trials ... (ref:1337) says that the bodies were dug up on 12 and 14 September and contains an early list of those that were dug up, giving some brief information about each person, which is helpful in identifying them.

A closely related memorial exists inside the Abbey. From Westminster Abbey: "In what is now called the RAF chapel a 19th century stone was laid down, usually covered by a carpet, recording the names of those buried in the vault, the top part of which says: In this vault was interred Oliver Cromwell 1658 and in or near it Henry Ireton, his son in law 1651, Elizabeth Cromwell, his mother 1654, Jane Desborough, his sister 1656... These were removed in 1661 followed by a list of officers of his army and council were also buried and then removed."

That same website notes that the vault of Cromwell's favourite daughter, Elizabeth Claypole (d. 6 August 1658), escaped the notice of the disinterrers and remains in the Abbey, undisturbed.

See Oliver Cromwell for what happened to his body and those of Henry Ireton and John Bradshaw.

The parish church for the people of Westminster has been on this site for about 900 years. The current St Margaret's church, the third on the site, was built in 1523. Since 1614 it has been the church of the House of Commons. In 1973 Parliament placed it under the care of the Dean and Chapter of Westminster.

Each November the lawn in front of this plaque is turned into a Field of Remembrance. This started in 1928. The lawn is divided into about 200 plots, each one for a particular regiment, etc. and members of the public are invited to remember individual soldiers by planting a small cross, or star of David, etc. in the appropriate plot.

This section lists the subjects commemorated on the memorial on this page:
Reburied parliamentarians

Admiral. The date given is his baptism, in Bridgwater, Somerset where there i...

Probably born Dorset. Sat in the House of Commons (MP for Dorchester) in two ...

Born as Mary Marbury. Married John Bradshaw in 1638. He was President of the ...

This section lists the subjects who helped to create/erect the memorial on this page:
Reburied parliamentarians

This building was partly destroyed by German aircraft on the 18th December 19...

There are two versions of this plaque, identically worded, attached to either...