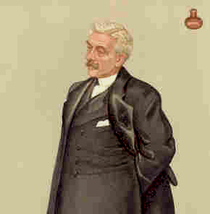 Nutrition promoter and food manufacturer. Born at 29 Main Street, Roslin, Midlothian. He took over his uncle's butcher shop and decided to use the large quantity of beef trimmings produced to make his own 'glace de viande' (meat glaze). This sold so well that he opened a second shop and a factory in the Holyrood area. He emigrated to Canada, and in1874 the French army gave him a contract to supply their army with preserved beef products. During this time he developed 'Johnston's Fluid Beef', which was to become 'Bovril'. He returned to Britain in 1880 where he developed the brand. Died on his yacht 'White Ladye' in Cannes harbour.

This section lists the memorials where the subject on this page is commemorated:
John Lawson Johnston

Businessman in the fish industry. "Who knew Billingsgate Market well and buil...