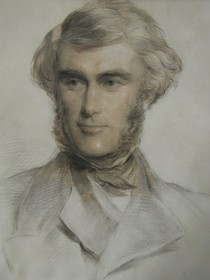 Born near Inverforth House, Hampstead. From the banking family. The prime mover in the battle to save Hampstead Heath from development. He was also the prime founder of Christ Church in Hampstead Square and there are memorial tablets to him and his family in the church porch. Also North End Mission Hall (opposite the Bull and Bush in North End Way) was built in his memory.

2017: Our colleague, Andrew Behan, has researched this man.
Born in Hampstead, the second son of Samuel and Louisa Hoare, née Gurney. His father was a partner in the banking firm of Bland, Barnett & Hoare, which after various mergers and name changes became Lloyds Bank plc. Baptised on 1 January 1826 at Sir George Wheeler's Chapel, Spitalfields and attended Trinity College, Cambridge, where he was listed as 20th Wrangler when he gained his B.A. in 1832. ‘20th Wrangler’ is Cambridge-speak for the 20th-best undergraduate maths third-year student (Henry Venn was 19th Wrangler not long before).

Married Caroline Barclay on 18 March 1837 in Dorking and the 1841 census shows them living at Bury Hill, Dorking, her parents’ residence, when his occupation was recorded as a Banker. The 1851 census shows them living in Hampstead Heath, and the 1861 and 1871 censuses lists them at Hill House, Hampstead. Between 1867 and 1875 he was President of Guy's Hospital and he was also a local magistrate. They had six children, the eldest son being Samuel Hoare who was to be created the 1st Baronet of Sidestrand Hall in 1899 and was father to Viscount Templewood. Died on 16 February 1875 at the Grand Hotel, Biarritz, and was buried in France. Probate on his estate was listed as under £160,000, which suggests some clever inheritance-tax planning.

This section lists the memorials where the subject on this page is commemorated:
John Gurney Hoare

The Charity Commission for England and Wales is the non-ministerial governmen...