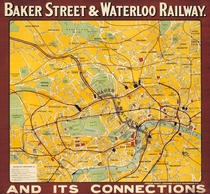 Originally formed as a line running from London to Dover. Branch lines were l...

The Transport Trust is a charitable institution that aims to increase and cha...