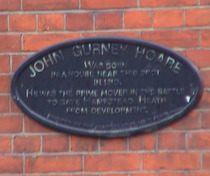 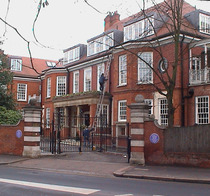 John Gurney Hoare was born in a house near this spot in 1810. He was the prime mover in the battle to save Hampstead Heath from development.
Erected by the Hampstead Plaque Fund

This section lists the subjects commemorated on the memorial on this page:
John Gurney Hoare

Born near Inverforth House, Hampstead. From the banking family. The prime mov...

For the history of this beautiful place go to: external site.

This section lists the subjects who helped to create/erect the memorial on this page:
John Gurney Hoare

This section lists the other memorials at the same location as the memorial on this page:
John Gurney Hoare

{Below an image of a Victoria Cross medal:}Captain John Vallentin, the South ...

Rev. Benjamin Waugh, founder of the N.S.P.C.C., served as founder minister of...

The plaque gives Fanny one too many "D"s.