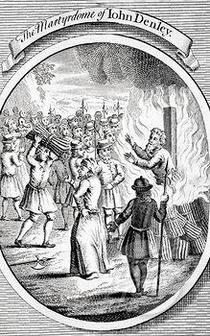 Protestant martyr. He was believed to have been a Baptist, which was rather dangerous in the reign of Mary I. Whilst returning from a visit to Maidstone, he was stopped by Edmund Tyrell, a justice of the peace and a zealous hunter of heretics. Denley was searched and was found to be carrying a personal statement of his faith. He was arrested, sent for trial in London and subsequently burnt at the stake in Uxbridge.

This section lists the memorials where the subject on this page is commemorated:
John Denley

Jacobite.  Either 'Radcliffe' or 'Radclyffe'.  Brought up in France.  Capture...