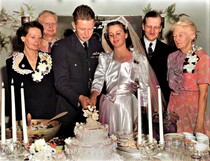 In October 1940 he was training as service pilot at the Polaris Flight Academy, Tulsa, Oklahoma, USA, in October 1940 when he went to Canada and joined the Royal Air Force Volunteer Reserve. He came to England in March 1941 for operational training on Hawker Hurricane aeroplanes and April 1941 was assigned as a Pilot Officer to No.234 Squadron at RAF Church Fenton, Tadcaster, North Yorkshire.

On 15 June 1941 he was transferred to No.121 (Eagle) Squadron at RAF Kirton in Lindsey, Gainsborough, Lincolnshire, where he remained until 7 October 1941 when he transferred to No.258 Squadron for a Far East posting as the UK climate aggravated his sinus condition. The squadron was initially based at RAF Martlesham Heath, Martlesham, Suffolk and he eventually arrived in Singapore on 29 January 1942 where he was involved in the Battle of Singapore 7 February 1942 - 15 February 1942.

On 23 February 1942 he was transferred to No.605 Squadron flying Hawker Hurricanes and defending Java. With four victories in the Far East to his credit, on 28 February 1942 he was shot down in combat and initially evaded capture until 20 March 1942 when he fell into the hands of the Japanese. He became a POW in a harsh prison camp in Java for the next 3 and a half years, the only member of the three Eagle Squadrons to suffer this fate. He left the Royal Air Force holding the rank of Flying Officer and had been awarded the Distinguished Flying Cross, (United Kingdom, not the U.S. version).

This section lists the memorials where the subject on this page is commemorated:
John Acy Campbell III, DFC

Infantry regiment of the British army. The bearskin on the statue and the fac...